DC Extended Universe Wiki
Register
Don't have an account?
Sign In
Advertisement
in: Objects, Weapons, Birds of Prey (And the Fantabulous Emancipation of One Harley Quinn) objects

This crossbow pistol was a weapon employed by Helena Bertinelli, known as the Huntress, as a tool of vengeance.

As a young girl, Helena Bertinelli witnessed the slaughter of her entire family at the behest of a rival syndicate. She, however, survived thanks to the benevolence of one of the hit-men, who spirited her away to be raised in Italy by his father and brother. She underwent extensive training to seek revenge, becoming skilled in martial arts, including the use of this crossbow pistol. She then returned to America and Gotham City where she hunted down and killed every one of those who had massacred her family using this crossbow pistol. In doing so, she earned the name the "Crossbow Killer," much to her chagrin, as she preferred to be known as "Huntress." She also got annoyed when people referred to the weapon as a "bow and arrow."[1]

After slaying Victor Zsasz, the final killer of her family, at the Booby Trap she learned that Zsasz was in fact nothing but an underling to the Black Mask, a powerful crime lord. She agreed to join Harley Quinn, Cassandra Cain, Black Canary and Renee Montoya in fighting off him and his forces. During the battle, she made use of the crossbow pistol to take down a number of opponents.[1] 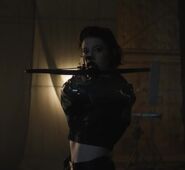