"I have nowhere else. The last war took everything from my people. We have nothing left. At least here, I'm free."
―Chief to Diana[src]

Chief, also known as the demigod Napi, was a Native American who became a skilled smuggler in World War I, as well as an ally of Steve Trevor and Wonder Woman.

Steve Trevor recruits Chief to serve on his team as a smuggler on a mission to infiltrate the Western Front during World War I, and he meets Diana Prince, an Amazonian warrior who came with him to fight in the war. He is a Native American and, in a quick conversation with Diana, he explains that colonial Europeans ("Steve Trevor's people") have taken everything from his people, and so he has nothing left, which is why he's found himself in Western Europe in 1918.[2]

Actions with the Wonder Men

A photograph taken in Belgium in 1918 including Chief is eventually discovered by Lex Luthor, who compiles into his footage of all the other metahumans.[3] The photo is eventually returned to Diana by Bruce Wayne.[2]

Chief is kind-hearted, soulful, pensive, open-minded, and intelligent. When he meets the remainder of the Wonder Men as well as many soldiers on the front, they excitedly embrace him, indicating his friendly spirit. He is also seen graciously turning down money that Belgian villagers try to give him after they save the town.

As a Native American (of the Blackfoot tribe), Chief is bitter about his people losing their land to white Americans, and hence he resolved to stay neutral in World War I, profiting from both sides. However, seeing Wonder Woman's compassion and unbreakable spirit in action renews Chief's hope, boosting his morale and energizing him past the point of purely monetary interests, to the point that Chief finally takes active initiative against the Central Powers.

Chief is also exceptionally open-minded, evident in him forming a close friendship with Steve Trevor (despite his bitterness against white American colonialists), and genuinely believing Wonder Woman's story about the God of War Ares (despite Sameer, Steve Trevor, and especially Charlie all being skeptical). 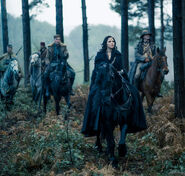 Retrieved from "https://dcextendeduniverse.fandom.com/wiki/Chief?oldid=135872"
Community content is available under CC-BY-SA unless otherwise noted.