Central City is a major city in Ohio, home to the scarlet speedster known as the Flash.

Central City fell victim to a series of robberies by Captain Boomerang, who once planted boomerangs in every prison within a 100 mile radius of the city. He was captured by the Flash, and was imprisoned in the city, but was later transferred to Belle Reve in Louisiana by Amanda Waller.[2]

After the disaster at Midway City, many of the fleeing evacuees were hoping for a best case scenario where they could reach Central City, despite being over a hundred miles south.[3] 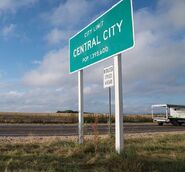 Behind the Scenes
Add a photo to this gallery

Retrieved from "https://dcextendeduniverse.fandom.com/wiki/Central_City?oldid=103876"
Community content is available under CC-BY-SA unless otherwise noted.