Natasha Rothwell
Carol Thomas was the director of the Smithsonian National Museum of Natural History in 1984.

About a week before July 4th, 1984, Carol hired Barbara Minerva as the Smithsonian's new gemologist and gave her a tour of the museum. During the tour, a group of armed robbers attempted to steal the Noble Diamond. Carol and Barbara were briefly taken hostage by the gunmen, before being saved by Jazz, Teo, Teo's friend, and Wonder Woman.[1]

A week later, Carol received a package from the FBI containing recovered artifacts that had previously been stolen. It fell under Barbara's responsibilities to catalog the items, and so she passed them along. Notably among these objects was the Dreamstone.[2] 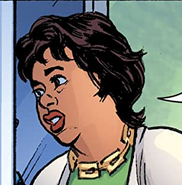