"You know what they say about the crazy ones."
―Captain Boomerang[src]

George "Digger" Harkness is a notorious criminal from Australia and a member of the Task Force X. Harkness was raised in poverty in Korumburra, the illegitimate child of Betty Harkness and W. W. Wiggins. Harkness learned early how to develop boomerangs into weapons. Having moved to the US, Harkness undertook a string of jewelry heists which brought him to the attention of Flash, who eventually apprehended him.

Earning the name Captain Boomerang from his father later in his life, Harkness became an infamous bank robber, renowned to be among the most lethal robbers in the world with 54 counts of aggravated assault and 98 counts of burglary to his name. During his time in Belle Reve, Harkness was serving three life sentences when he was recruited by Amanda Waller to enlist in the government-sanctioned Task Force X, where he was assigned to neutralize the threat of Enchantress and Incubus in Midway City, shortening his prison sentence as a result.

George Harkness was born on December 9, 1985, in Korumburra, Australia, to Betty Harkness, where he was raised in poverty as the illegitimate child of W. W. Wiggins, an American toy manufacturer. His stepfather, Ian Harkness, hated the boy and subjected him to abuse and cruelty. As a child, George learned how to craft sophisticated boomerangs and even developed them into weapons. At age 15, he and a friend robbed a general store and escaped with the money he obtained thanks to a boomerang. Nonetheless, his stepfather banished him from the house as a result of the incident, but Betty bought her son a plane ticket to Central City, Ohio, and told him to get in touch with his biological father.

During the search, Harkness learned that Wiggins Game Company had been searching for a spokesman, and took the chance to audition under the alias George Green for the job which he landed. Wiggins became impressed with his son's boomerang-throwing skills and gave him the title Captain Boomerang. Boomerang, however, had other plans for his new alter ego and began a string of jewelry thefts that came to the attention to the Flash, who arrested the criminal. Boomerang later escaped by claiming to be impersonated and started robbing every bank in Australia at least once before returning to the United States for a fresh target set.[3]

"No honor among thieves, eh?"
―Flash to Captain Boomerang[src]

The deranged boomerang-thrower continued to clash with the Flash during his criminal activities, such as when he tied the unconscious metahuman to a rocket, only to be captured again when the lightning-fast vigilante was able to free himself. In their last encounter, the Flash caught Boomerang participating in a heist on a diamond exchange.

There, Boomerang betrayed his associates, throwing a boomerang at the man's head to knock him out before collecting the loot for himself. Before he could leave, he was swiftly and easily incapacitated by the Flash and later incarcerated at Belle Reve, where he spent this time lashing out at guards from inside Cell D-108.[3]

"Hey, one minute I'm playing Mahjong with me nanna, then this red streak hits me outta nowhere!"
"Shut up! You were caught robbing a diamond exchange!"
"I was not!"
―Captain Boomerang and Rick Flag[src]

Captain Boomerang was escorted to the rest of the Task Force X team outside of Belle Reve shortly before they have dispatched to Midway City. He was transported in a yellow body bag and immediately lashed out against nearby soldiers when released. He was welcomed by Rick Flag, who transported each of the member's equipment needed for completing their mission, then traveled to Midway City with the goal being to stop Enchantress and Incubus from destroying the city.[3]

"Mind games."
"What's that?"
"This whole bomb in the neck crap, it ain't real, mate. They're making us prisoners of our minds. I don't know about you, but I'm getting out of here; you in?"
―Captain Boomerang and Slipknot[src]

The Task Force X crash-lands in Midway City, and Boomerang, secretly wishing to test how real the implanted nano-bombs are, promptly tricks Slipknot into believing that the bombs are a fake bluffing tactic of Amanda Waller. Pretending to join in the escape attempt, Boomerang allowed Katana to subdue him, while Slipknot began scaling a building. Rick Flag activating the nano-bomb, exploding Slipknot's head and killing him. Boomerang, having his suspicions confirmed, wisely chooses to stay with the group. Attracted to Katana, Boomerang asks if she has a boyfriend.[3]

Soon after, the group encounters weird looking creatures. When Rick Flag approaches them, the creatures became hostile and attack. Instead of fighting with the rest of the squad, Boomerang cracks open a can of beer and watched the fight.

However one of the creatures attacks him, bringing him into the fight. During the fight, Boomerang's pink unicorn falls on the ground. After taking down a few creatures Boomerang and the rest of the squad watched as Deadshot gunned several creatures from atop a car until they were all gone. After the battle Boomerang picks up his pink unicorn and chastised El Diablo for not helping during the battle. Diablo told him that he doesn't use his powers anymore and produces a flame from his hands. Boomerang then mocks him by lighting his lighter.[3]

Continuing the fight through the city, the Squad heads into a building their target is residing in. They encounter resistance in numerous Eyes of the Adversary that were formerly soldiers that were accompanying them; as Flag's death meant their own, the Squad was forced to fight with the objective of protecting him.

The group is lead to where their target is residing, being told to wait while Flag brings them out of their safe room. To Boomerang's surprise, the person the group is to protect is Waller herself; she has another screen to detonate the bombs to keep the Squad from trying to enact revenge on her.

The group is lead to the roof, where they would be extracted by helicopter. However, it turns out the chopper was hijacked by the Joker to rescue Harley Quinn; she promptly boards, as her bomb had been turned off by the kidnapped Van Criss. Waller contracts Deadshot to kill Harley, but he promptly misses, earning further respect from Boomerang. However Waller calls for a missile strike that downs the chopper, with Harley seemingly dead, Boomerang sympathized with the disheartened Deadshot. Once another chopper arrives, Waller leaves but is brought back down by Incubus. The group head to ground level, finding Harley survived the crash, Boomerang then returns the bat she had left behind.

The Squad finds the crash site, and Deadshot finds files in the chopper and shows the team that Waller is responsible for the entire situation; Flag explains Waller made the unwise move of sending Enchantress to place a bomb to kill Incubus, unaware of their relation. Once Enchantress took control of her host, she began building a machine to ravage the military bases on Earth. Boomerang, promptly disgusted that he and the others are basically a mop-up crew heads into a bar for a drink.[3]

"Why is it always a knife fight every single time you open your mouth? You know, outside, You're amazing. But inside, you're ugly."
"We all are. We all are! Except for him; he's ugly on the outside, too."
―Captain Boomerang and Harley Quinn[src]

Having drinks, Boomerang listens as Deadshot explains that they were meant to be patsies to take the blame for everything going on; for a brief moment, he had hope. El Diablo quips that a killer having hope wasn't something he thought was possible, explaining about his past. To Boomerang's shock, Diablo once had a happy married life with children, despite being an arsonist-for-hire in the gang world. One night, however, Diablo's anger and powers cost him his family.

When Harley told Diablo to own his actions, Boomerang snapped and noted that while Harley was attractive, her personality was ugly. Harley retorted they were all ugly on the inside, except Croc, who was ugly on the outside as well; however, Croc laughed that he was beautiful on the inside. Flag then enters the bar, takes the device controlling their neck explosives off his wrist, and smashes it on the table. Boomerang quickly takes advantage of this and leaves the bar with handfuls of beer, but when Harley and Deadshot had decided to help Flag complete the mission, Boomerang rejoined them along with the other squad members.[3]

"I'm out of here. Anyone who wants to stop me, step up."
"Let's go."
―Captain Boomerang and Amanda Waller[src]

Boomerang uses surveillance to survey Enchantress' machine, but it is quickly destroyed by Incubus. He fought Enchantress and Incubus along with his teammates, and they defeated them. As everyone prepared to go their separate ways, Waller appeared alive, much to the verbal confusion of Deadshot. As she was

holding the detonator to the bombs, Boomerang decided to fight her for the right to go free. The woman only gave him a cold stare and accepted his challenge without hesitation. Boomerang was afterwards sent back to Belle Reve, where he was on one instance seen raging against Amanda Waller in his cell.[3]

Life on the run

An indeterminate time after the events in Midway City, Boomerang was once again out of prison and wanted by the Gotham City Police Department.[4]

Captain Boomerang is a tough, sarcastic, humorous and somewhat crude individual (labeled a "deranged lunatic" on his psychological profile) who has no qualms with theft (98 counts of burglary), beating (51 counts of aggravated assault), or killing, going so far as to trick Slipknot into trying to escape the Suicide Squad (and subsequently getting himself killed), just to test if the implanted nano-bombs were actually real, not wanting to risk his own life.

Despite that, however, Harkness isn't completely devoid of empathy, greatly respecting Deadshot's refusal to kill Harley Quinn, sympathizing with Deadshot's inability to save Harley (when she was assumed to have been killed by Waller's forces), being depressed and shocked after learning El Diablo's dark secret (despite previously mocking El Diablo with a cigarette lighter), and even reprimanding Harley for mocking El Diablo about it. The only other time he shows fear is when Waller accepted his challenge, to fight for his right to be free; her steely gaze was enough to put him in his place.

Harkness also has a penchant for drinking beer (even taking a sip in the heat of a battle with Enchantress' monstrous Eyes of the Adversary army), and a fetish for pink unicorns (carrying around a stuffed one nicknamed "Pinky" on himself most of the time).

"Sorry. It's what I do."
―Captain Boomerang to Katana[src]
"But he tangled with a metahuman and lived to tell about it."
―Amanda Waller[src]

"He robbed every bank in Australia at least once. Then he came to America for a fresh target set."
―Amanda Waller[src] 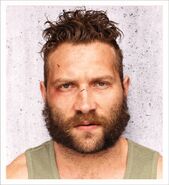 Retrieved from "https://dcextendeduniverse.fandom.com/wiki/Captain_Boomerang?oldid=129717"
Community content is available under CC-BY-SA unless otherwise noted.