Peacemaker
"Butterflies" are a species of deadly parasitic aliens capable of disguising themselves as humans by taking human hosts and use these forms to infiltrate and live among humans.

Butterflies are rodent-sized, insect-like creatures that burrow into and reside within the heads of humans and other similarly-sized animals. The Butterfly nests on the brain of the victim and controls it, enabling the Butterfly to use the body as an extension of itself so it can live among humans as one of them.

While possessed by a butterfly, the human host is affected by the butterfly and gains some superhuman abilities, such as enhanced strength, enhanced durability, enhanced speed, enhanced agility, and they develop a proboscis to feed on a nectar-like fluid. The process of a butterfly entering a living creature's body and nesting in their brain is shown to be lethal to the host, causing them to cough up large amounts of blood until they drop dead after which the Butterfly takes over the brain. Ik Nobe Llok confirmed that the human body that a Butterfly controls is completely dead by the time the Butterfly nests in the brain.

If the human host is mortally wounded by other means aside from the burrowing procedure, the environment within the body becomes inhospitable to a butterfly thus requiring them to flee as soon as possible. However, this leaves them vulnerable to be mortally wounded themselves until a new host is acquired.[1]

The butterflies arrived on Earth through space ships. Peacemaker discovered one of their ships in Annie Sturphausen's apartment.

The butterflies had access to advanced teleportation technology, which they planned to use to move their Cow from the Coverdale Ranch to a cavern somewhere in Maine. The activation of Peacemaker's Sonic Boom helmet in the ranch's barn collapsed the room where the teleportation equipment was held, damaging it significantly.

The butterflies used milking equipment to extract the amber goo from their Cow, which also doubled as restraints for the beast, keeping it in a proper position to be milked.

The butterflies repurposed human equipment at the Glan Tai Bottling Plant in order to contain the amber goo extracted from the Cow, and distribute it across the world. 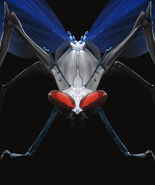 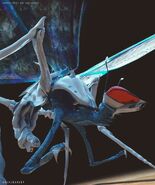 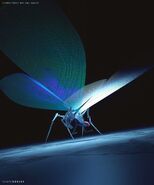 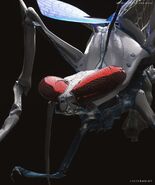