"Prepare for liftoff. And away we go."
―Briscoe departing from Belle Reve[src]

Briscoe is the pilot of Sheba, the helicopter used to fly Task Force X around on missions. He was the one to pilot the helicopter to Corto Maltese in 2021 for the Jotunheim mission.

Briscoe was ordered to transport Rick Flag and Task Force X to the Latin American island Corto Maltese. As they arrived, Briscoe gave the signal for the team to jump. 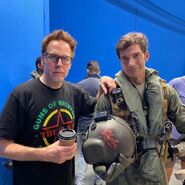