The Bracelets of Submission, also known as the "bulletproof bracelets," are a pair of indestructible arm enclosing vambraces. They are worn by Wonder Woman on her wrists and are able to deflect almost all incoming melee and ranged attacks. They can also be smashed against each other to create a shockwave strong enough to knock back beings as strong as Doomsday.

The Death of Superman

As Wonder Woman joins the battle against Doomsday, she arrives just in time to save Batman's life from Doomsday's lethal thermal blast, deflecting the beams with her indestructible bracelets.

Rescue at the Old Bailey Courthouse

Two years after Superman's death, Wonder Woman arrived at the Old Bailey Courthouse and saved the hostages with the Bracelets of Submission to prevent the Black Clad Alpha from killing them. After stopping the bomb and saving the hostages, Wonder Woman then declared herself a believer as she deflected the Alpha with her bracelets.

Wonder Woman, along with the Justice League, fought Steppenwolf under Gotham Harbor when she used her bracelets to deflect him and saved the Flash from being carried away by the Parademons.

On Heroes Park, the Justice League fought Superman, Wonder Woman was about to use the Bracelets to stop the Kryptonian from approaching Batman; however, Kal-El sped up to Wonder Woman and grasped her bracelets, much to her shock.

During the battle with Steppenwolf when he prevented Cyborg from separating the Mother Boxes and grabbed him by the throat, Wonder Woman struck one of her bracelets with her shield in front of the New God General as the bridge collapsed and they fell.

After Aquaman used his trident to swiftly hit Steppenwolf, Diana then used both the Bracelets of Submission to deflect him right above them that made him get slammed into a wall.[1]

The Bracelets of Submission, much like Wonder Woman's first and second shield, are virtually indestructible (although both show signs of minor damage), capable of deflecting even a tremendously powerful and destructive thermal attack from the monster Doomsday, creating a massive wave of energy outwards. In addition to deflecting energy, the bracelets are capable of absorbing energy as well.[2] 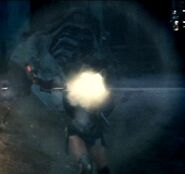 The bracelets releasing blasts of energy 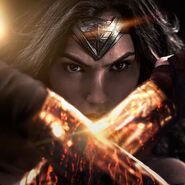 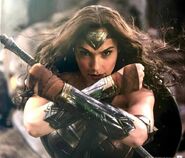 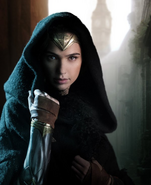