"Friends, brothers, men of Gotham. I have funded you. I've protected you. I scratched your backs and kept you outta jail. Well, now it's time to say thank you. Go show those little bitches you don't mess with Roman Sionis."
―Black Mask[src]

Not much is known about Roman's early life, except that he came from the wealthy Sionis family, whose name is plastered on "about half the schools and hospitals in Gotham." While Roman himself claimed that he wasn't born into privilege and had to work for everything he has, the fact that he was cut off by his family due to excessive spending and poor business sense says that Roman is likely not the most unbiased narrator of his own life.[1]

Head of a criminal empire

At least 15 years before the events surrounding The Booby Trap, he met up with Victor Zsasz and funded crime boss Stefano Galante's power-grab, which resulted in the murder of the entire Bertinelli line (sans Helena Bertinelli, who managed to escape). Since then, Roman has been building a criminal empire for himself in Gotham's East End, unifying crime families and keeping those under his sway out of jail.

At some point, he met Dinah Lance and gave her a job singing at his club, taking her off the streets and earning her (reluctant) loyalty. He calls her his "little bird," thanks to her alias Black Canary.

Black Mask eventually came to meet Harley Quinn, but while he came to deeply loathe her for being every bit as malevolent as he was and hence a worthy threat, he did not initially harm her significantly because he feared her lover, the Joker. Harley had done all sorts of things to get on his nerves, from petty to harmful, including: pronouncing espresso as "expresso," having a vagina (being a woman), voting for Bernie Sanders (implying he is right-wing), peeing in his Brita, calling him "Romy," sticking gum under his table, stealing his remote, calling him "Queef Richards," selling a family heirloom, spoiling lots of movies, stealing his limelight, leaving a floater (not flushing the toilet), interrupting him once, not laughing at his joke, forgetting to use a coaster, burping the alphabet, trashing his bathroom, leaving the toilet seat down, puking on his carpet, changing the channel, breaking a window, eating his lunch, crashing his Rolls-Royce, ripping a loud one (farting), causing a ruckus, graffitiing his car, and torching his paintings.[1]

Learning about the Bertenelli diamond

While Harley Quinn was celebrating her newfound emancipation from the Joker, Roman was looking to bring more Gotham crime families into the fold. He proposed a merger with the Golden Lions but was turned down by their leader, Mr. Keo, who refused on the basis that the Lions are a family business, and have been for nearly a century. This infuriated Roman, who went off on a tirade about how his own family supposedly never did anything for him, and how he hadn't had the world handed to him "on a silver spoon" as most people believed. Though Mr. Keo remained unswayed, Roman asked him to sleep on it and meet him again in two days to revisit the matter.

Later that night, after Harley broke his driver's legs, he ordered Zsasz to find him a new one. He and Harley also shared a tense moment where Harley admitted she knows Roman understandably detests her, and thanked him for "firing" his now-useless driver on her behalf. It only served to deepen his disdain for her and fuel his later decision to have her rounded up and shipped back to him once he learned she was no longer under the Joker's protection.

In the early hours of the morning, he watched from his penthouse while Dinah Lance saved an inebriated Harley from being abducted by two men. After getting a good look at her fighting skills, he ordered Zsasz to go promote her from his singer to his driver.

When his deal with Mr. Keo fell through, he rounded up Keo, his wife], and their daughter, and expressed disappointment at his choice not to join him. Shushing his sobbing wife and daughter, he told Keo that he'd hoped they could be family and thought he'd given him a great pitch. He had Zsasz peel off his face and slit Mrs. Keo's throat, after which Zsasz asked him what they should do about the Keo family's daughter. While initially, Roman figured the first two bodies were enough to send a proper message, he changed his tune once he realized the daughter blew a snot bubble while thanking him for his mercy. Disgusted, he went back on his word and ordered Zsasz to peel her face off as well, tossing away his gloves before dancing out of the warehouse, where Dinah waited as his getaway driver.

The next morning, he shared breakfast with Zsasz, who told him that yet another gang had capitulated to them afterword of the Keo family's murder got around. He also shared the news of the Crossbow Killer's newest victims, Rossi and four other members of his crew. The news upset Roman, who had to be soothed with a shoulder massage from Zsasz until Dinah arrived for her morning assignment. Though Zsasz wanted to send her away because she was late, Roman refused and began to show off a vast array of his personal belongings, including a Chokwe mask from his time in Congo-Kinshasa, a pair of shrunken heads from the Shuar of Ecuador, a series of acupuncture models unburied from the mountains in an unknown location, and a large statue of himself.

After learning from Zsasz that Harley Quinn and the Joker broke up, he ordered Zsasz to have his men find her and bring her to him. He also told Dinah to go pick him up the newly-located Bertinelli diamond, urging her to bring Zsasz with her on the way. This would turn out to be a mistake, as Zsasz would later have the diamond pickpocketed from him by Cassandra Cain.[1]

"I wanna kill you. Because without the Joker around... I can. For all your noise and bluster, you're just a.. a silly little girl, with no one around to protect her."
―Black Mask[src]

Infuriated by the news, Roman could only be comforted by Zsasz, who informed him that his men had brought Harley to the club. Zsasz suggested they go "blow off a little steam" by torturing her to death. Temporarily satisfied, Roman agreed, and he and Zsasz left Dinah so they could go and confront Harley.

Roman asked her if she knew why he wanted to kill her, and, while she wasn't certain, she did have an idea, listing grievances such as her gender, political ideology, two condescending nicknames, allegedly singular incident of interrupting, among many other grievances some much more violent and concerning in nature than the ones she had been accountable enough. Each of his attempts at setting a frightening, villainous atmosphere were thwarted by a quick-talking Harley, who pleaded with him not to spout out a cliche monologue about why she was there and what he was intending to do to her. She also insinuated that the reason he wanted the Bertinelli fortune so badly was to restore his father's respect in him, albeit the attempt was, according to her, misguided.

Roman, on the other hand, insisted he wanted to kill her just "because I can." He sat down with a bowl of popcorn prepared by one of his cronies and prepared to watch Zsasz torture her, only to pause when she revealed that she overheard him talking about his lost diamond, and offered to get it back. Though skeptical, Roman agreed, giving her until midnight. If she didn't have it by then, he told her he intended to peel off her face and pickle it.[1]

Betrayed by Harley and attack on Erika

Once he let Harley go, he instructed Zsasz to set a $500,000 bounty on Cassandra's head, making both her and Harley into the two biggest targets in Gotham City. Dinah, who had been Renee's informant for some time, quickly called her from the bathroom of Roman's club to inform her that there was a price on Cain's head. Assassin after assassin went after the pair, only to be killed and countered at every turn.

After being informed that they'd escaped capture, Roman became violently angry, a mood exacerbated by the loud laughter of one of the nearby patrons of his club. Though it was simply an ill-timed reaction to a joke told by one of her friends, Zsasz told Roman that the woman, Erika, was indeed laughing at him. In response, Roman ordered her onto the table, where he forced her to dance for him. Calling her dress "fucking hideous," he ordered one of her friends to cut it off of her with a steak knife, delighting in her obvious distress. He then stopped Dinah from leaving the club, first asking her to reassure him that she would never betray him, then making her dance with him.[1]

"He's after all of us. The kid just robbed him, you betrayed him, you killed his BFF, and you're dumb enough to be building a case against him."
―Harley Quinn regarding the Black Mask[src]

Things came to a head as Harley Quinn took Cain to The Booby Trap intending to turn her over to Victor Zsasz. Black Canary was ordered to drive Zsasz there and in the process betrayed Black Mask by warning the detective Renee Montoya of what was coming. Rather than leave things simply to Zsasz, Black Mask assembled a small army, headed by himself, and upon their arrival, the battle began. Harley Quinn convinced Renee Montoya, Dinah Lance, Cassandra Cain, and the Huntress, newly joined to their group, that they needed to work together if they were to have any chance of defeating the forces aligned against them.

In a fierce fight, they battled through the Black Mask's forces but found the Black Mask waiting for them, now in full costume. He and his minions managed to capture Cassandra Cain and a chase ensued. Things came ahead at the Founders Pier, wherein a final confrontation, Black Mask met his match. While Quinn was fighting him, Cassandra Cain planted a grenade on his person. Quinn then kicked him off the pier and the grenade exploded, killing him and sending his remains into the watery depths.[1]

"I agitate his already delicate sense of mental equilibrium, that and his obsessive-compulsive need to be the center of attention."
―Harley Quinn[src]

Said to be an absolute narcissist and a homicidal sociopath, Black Mask is pure evil. He is also highly ambitious, power-hungry, sadistic, and emotionally unstable. He is also highly misogynistic and seems to see women mainly as objects for his use and amusement. He revels in violence, and can easily lose his temper when things do not go his way. However, he appears to care for both his right-hand man and best friend Victor Zsasz as well as his new driver bodyguard, Dinah Lance, who he appears to have some level of attraction towards. Still, he is ultimately a remorseless and chaotically malevolent psychopath, showing signs of unspeakable depravity. 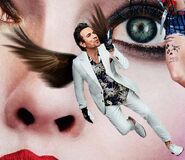 Retrieved from "https://dcextendeduniverse.fandom.com/wiki/Black_Mask?oldid=139122"
Community content is available under CC-BY-SA unless otherwise noted.