Start a Wiki
watch 01:51
'DC Extended Universe' Profile: Black Manta
Do you like this video?

The Guy from the Sub
Black Manta

"I'll show you the same mercy you showed my father. And gut you like the fish you are!"
―Black Manta[src]

David Kane, also known as Black Manta, is a mercenary and the son of the late Jesse Kane.[1] He came into conflict with Aquaman after he refused to save his father's life. Upon allying with Orm Marius of Atlantis and receiving experimental Atlantean technology, David combined the Atlantean weaponry with his own equipment to create a powerful battle suit designed to combat his new enemy.

"Wait! Help me! He’s trapped! You can’t leave him like this! Please!
You killed innocent people. You ask the sea for mercy."
―Black Manta and Aquaman[src]

David Kane was a pirate like his father, Jesse Kane, and at some point in time, he learned about Aquaman and wanted to encounter him. Their gang took over a submarine, and as they were celebrating their apparent victory, Jesse presented him with a special knife.

Initially, he scoffed at it, calling it a piece of junk, and the love of "[his father's] life"; but when Jesse told him about how it belonged to his grandfather, who fought in World War II as one of the Navy's first "frogmen" (code-named "Manta" for his stealthiness), he immediately changed his mind, and accepted the blade. Suddenly, they were interrupted by Arthur Curry, known as Aquaman. David proclaimed that he expected to eventually face the Aquaman but was quickly defeated the Atlantean.

Aquaman deflected a rocket from Jesse, that caused a torpedo to topple over him, trapping him as the submarine became flooded. David begged Aquaman for help but was told that they kill innocents and should not expect mercy from the ocean. David tried to save his father, but his father committed suicide by using a hand grenade. David was forced to flee and started to bear a deep grudge against Aquaman.[2][3]

"You can't run. You owe me blood!"
―Black Manta to Aquaman[src]

Sometime after his father's death, David was contacted by King Orm Marius, who paid him for the staged attack his crew launched on Nereus. David demanded that Aquaman should be killed, as he was responsible for Jesse's death, but Orm shrugged it off and assured David that Aquaman wasn't one of them. Still hellbent on getting revenge on Aquaman, David allied with the Atlantean king.

David took the Atlantean weaponry and merged it with his diving suit, making it a specialized battle armor to fight Aquaman. In particular, David took a plasma beam cannon and installed it into his helmet, however, the helmet was melted during a test firing of the plasma beam. David made the helmet significantly bigger to circumvent the problem. Once the battle suit was completed, he painted it black and dubbed himself "Black Manta" in honor of his late father and family legacy.

Black Manta, along with Murk and the Men-of-War, ambushed Aquaman and Mera in Sicily, Italy. Black Manta attacked Aquaman while the soldiers chased Mera. Aquaman identified Black Manta as the same pirate from the submarine, which Black Manta confirmed. Black Manta used his enhanced strength provided by the suit and Atlantean weaponry as well as Aquaman's preference to ensure the safety of civilians to overpower and wound Aquaman numerous times, but Aquaman ultimately managed to come out on top, damaging his suit, making it malfunction before throwing a pair of chain stone balls directly into Black Manta's helmet, causing it to explode and throwing David off a cliff to his apparent death.[2]

"This is Atlantean technology, isn't it? Could you tell me how you got this?"
"Sure. But first, you gotta tell me how to find him."
―Stephen Shin and Black Manta[src]

Much later, it is revealed that David survived, though his Black Manta suit was badly damaged from the fight. He was stranded on the ocean until Dr. Stephen Shin, a scientist obsessed with finding Atlantis, saved him. Shin asks David how he got the technology, and David says he will if he tells him how to find Aquaman. David then throws the Manta Knife at a photo of a silhouetted man with a question mark reads, “Who is Aquaman?”.[2]

Being a pirate, David Kane is a cruel ruthless individual who doesn't hesitate to kill those who stand in his way. Initially obsessed with treasure, David was willing to conspire with King Orm and help him declare war with the surface as long as he was paid. Despite his cold nature, however, David greatly values his family lineage, as he immediately treasured his grandfather's knife after learning about it and had a very close relationship with his father. When Jesse Kane was in danger, David desperately begged his enemy Aquaman to save him and initially refused to leave his father behind. David's vendetta against Aquaman is purely based around avenging his father's death.

After Aquaman caused Jesse's death, David developed an intense hatred towards all Atlanteans and vowed to kill Aquaman and other Atlanteans. David is pragmatic, willing to continue working with Orm despite his sheer hatred towards Atlanteans as he knew he would obtain powerful weaponry from them. Later, he agreed to work with Dr. Shin knowing that he would help him track down Aquaman.

Upon becoming Black Manta, David became bloodthirsty, ruthless, and heartless; completely devoted on nothing but murdering the Aquaman at all cost not caring if other humans die in the process. Black Manta never holds back, as observed when he continuously attacked Aquaman until a hit was landed, leaving the Atlantean-hybrid on the defense through most of their battle and relentlessly attacking Arthur ignoring the damage his suit had taken during the battle. When having the upper-hand on Aquaman, Black Manta often taunted his mortal enemy.

David Kane does not possess any innate powers. Instead, he uses Atlantean technology supplied by Ocean Master to provide him with superhuman strength, endurance, durability, and a variety of weapons.

"You thought you could walk away?"
―Black Manta to Aquaman[src]

"That's right, but now I have Atlantean steel! Call me Black Manta!"
―Black Manta to Aquaman[src] 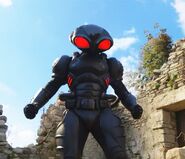 Retrieved from "https://dcextendeduniverse.fandom.com/wiki/Black_Manta?oldid=123842"
Community content is available under CC-BY-SA unless otherwise noted.