"So let me get this straight. You do it dressed like a bat? Like an actual bat?"
"It's worked for 20 years in Gotham."
―Aquaman and Batman[src]

The Batsuit is Batman's assortment of tactical uniforms in his war on crime in Gotham City. Batman wears the disguise to both conceal his true identity and to frighten criminals.

The Batsuit sports a chest-mounted bat symbol, with a scalloped cape, a bat-like cowl, a pair of gloves, boots, a utility belt, and tight-fitting body armor. The gloves have lead knuckles built in while the toes are also laced with lead, both of these are meant to enhance strike attacks.[1] It is designed to be almost completely bulletproof and blade proof, as well as completely fireproof.

"Dressed like a bat. I dig it."
"May be temporary."
―Aquaman and Batman[src]

The Batsuit Bruce Wayne normally wears when on patrol in Gotham City, is a grey technical carbon fiber tri-weave around his torso and legs, with a black cowl and a large cape. His hands are protected by armored gloves and he has gauntlets on his wrists with three razor sharp blades. The cowl incorporates a robotic voice modifier to disguise the billionaire's real voice, and several retractable lenses (the purpose of the lenses are not shown in the film; the only time they are seen is when Alfred is performing maintenance on the cowl). His feet and shins are protected by thick black armored boots. Around his waist is his utility belt, an arsenal of helpful gadgets including batarangs and his grappling gun. The suit is shown to have rips, tears and restitches, memoirs of his long and violent career in fighting evil. The suit protects him and his identity but also is a symbol to strike fear in his enemies. It features the following capabilities:

In an alternate apocalyptic future where a tyrannical Superman rules over Earth, Batman wears a modified version of the Standard Batsuit with a beige trench coat, a black balaclava and sand goggles. It was equipped with his custom assault rifle slung across his back, a handgun holstered on his right leg, and a set of binoculars.

Alternatively, Batman also wears a powered exoskeleton version of the Batsuit. It is far more durable than the original version, being made of seemingly some sort of metal. The eyes glow with a light bluish hue, therefore being visible in low light, unlike the Original suit. The suit's armor and mechanisms are able to heavily increase effort, exertion and resilience to superhuman capabilities, making it useful in combat against opponents as powerful as Superman himself.[2] It offers him the following capabilities:

The tactical Batsuit is an upgraded version of the regular Batsuit. It has goggles to help him pilot his vehicle, and light armor to help him endure the hits while still being able to move and throw quick punches. 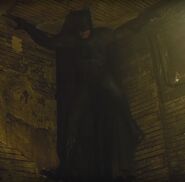 Standard Batsuit
Add a photo to this gallery 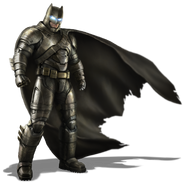 Armored Batsuit
Add a photo to this gallery 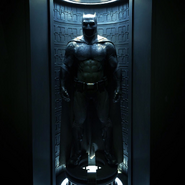 A full shot of the Batsuit, shared by Zack Snyder.

Tactical Batsuit
Add a photo to this gallery

Retrieved from "https://dcextendeduniverse.fandom.com/wiki/Batsuit?oldid=131245"
Community content is available under CC-BY-SA unless otherwise noted.