Atlantean warships are vessels utilized by the various kingdoms of Atlantean culture as war chariots. Some of these warships are battle mounts that are controlled by the Men-of-War. While other types of different ships act as exo-mantels manned by Fishermen or the The Brine.

The Atlanteans would often make use of their sizable armada's throughout the run of Aquaman's adventures. Orm would send a detail in secret to the oceanic mercenary David Kane to conduct payment for his services when using a land based submersible to disrupt a council meeting between himself and Nereus. All for the purpose of putting on airs that the surface world was an aggressive threat that needed to be cleansed.[1]

The warships of the Atlantean races are specially equipped war-rigs for land to undersea combat. They're also utilized for modes of transportation across the high seas for the kingdoms' numerous armadas for the purpose of ferrying war fleets across battlefields.[1] 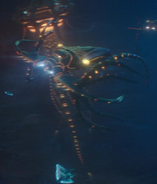 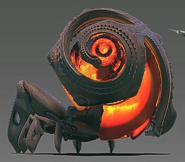 Retrieved from "https://dcextendeduniverse.fandom.com/wiki/Atlantean_warships?oldid=140409"
Community content is available under CC-BY-SA unless otherwise noted.