Justice League: The Art of the Film
Aquaman: The Junior Novel (mentioned)

Aquaman: Arthur's Guide to Atlantis
The Art and Making of Aquaman

"If you seek my power, you must prove your worth."
―King Atlan[src]

Atlan was the king of Atlantis prior to the nation's submergence, during the time of Steppenwolf's first invasion of Earth. He led his army to the shores to aid in the battle against Steppenwolf, and was one of the three people entrusted with the security of the Mother Boxes.

Later, he went into exile and died when Atlantis sunk into the ocean during a test with the Trident of Atlan. His skeleton held the trident ever since, which was guarded by Karathen. Millennia later, Arthur Curry/Aquaman, a distant descendent of Atlan, followed the leads left by his ancestor and obtained the Tridant, becaming the true king of Atlantis.

At some point, Atlan gathered the Atlantean tribes together into one civilization, and became the first king of Atlantis. He created a trident to rule the kingdom. Because of his lead, Atlantis faced great technological advancement.[1]

Around 3,000 B.C., Atlan led the Atlantean forces, who fought alongside the Amazons and humans against Steppenwolf and his army of Parademons during the New God's invasion of Earth. During the battle, Steppenwolf combined the Mother Boxes and used the power of the Unity to begin to terraform the planet into an extension of his home world of Apokolips. However, with the power of the combined forces of the Atlanteans, Amazons and Humans as well as Zeus, Ares, and Artemis of the Old Gods and Yalan Gur of the Green Lantern Corps, they were able to stop the invasion and destroy the Unity.

"Left behind, the Mother Boxes were too dangerous to be kept together. One was entrusted to the Amazons. One to the Atlanteans. Both sealed and guarded in secure strongholds."
―Diana Prince to Bruce Wayne[src]

In the aftermath of the battle, Steppenwolf and his forces were forced to retreat on their, and the three Mother Boxes were left behind. Fearing their power when combined, the three tribes of Earth decided to each take one of the Mother Boxes and guard them so that they could never be used again. One was entrusted to the Amazons, another buried by the Humans. The Atlanteans were also entrusted with one of the Mother Boxes, which they secured in a vault.[1]

The great fall and exile

"It was a time of great prosperity and technological advancement. We had unlocked the secret of unlimited energy at a time when the rest of the world still thought the Earth was flat. But we became too ambitious; too hungry for power. The ocean swallowed us, and Atlantis sank."
―Nuidis Vulko tells Arthur Curry about the history of Atlantis[src]

Not long after the attempted invasion, a disastrous experiment with the Trident of Atlan headed by Atlan caused Atlantis to sink beneath the waves. As a result, he went into a self-imposed exile and died in a deep pit in the Hidden Sea. Before his death, Atlan left behind a message inside of an artifact that can only be displayed when inserted into a stand in the forge in the Kingdom of the Deserters, where the Trident was made. In the message, Atlan guides the true heir to the Trident, telling them that with its power they can unite above and below.

Discovery of the Trident of Atlan

In January 2018, Arthur Curry and Mera traveled to the Kingdom of the Deserters while in search of the Trident of Atlan. Upon finding the forge, Mera used her powers to insert some of Arthur's water into the artifact, causing the machine to activate, playing Atlan's message to the both of them.

His skeleton still holds the trident, guarded by Karathen until Aquaman arrived, proved his worth and took it, at which point his skeleton crumbles.[2] 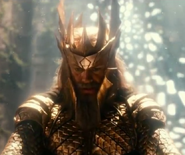 Retrieved from "https://dcextendeduniverse.fandom.com/wiki/Atlan?oldid=129689"
Community content is available under CC-BY-SA unless otherwise noted.