Aquaman and the Lost Kingdom

View source
watch 01:23
Wiki Targeted (Entertainment)
Do you like this video?
Play Sound
__

Aquaman and the Lost Kingdom

Aquaman and the Lost Kingdom is an upcoming 2022 superhero film based on the DC Comics superhero of the same name. The film is the sequel to Aquaman. It will be the thirteenth installment in the DC Extended Universe, and is scheduled for release on December 16, 2022.

In December 2018, The Hollywood Reporter announced via Warner Bros. Pictures' chairman, Toby Emmerich, that the studio was developing a sequel.[10] Discussions of a followup film began during post-production when director James Wan confirmed to TotalFilm that the first film left room for further stories.[1] Aquaman lead Jason Momoa announced to SyfyWire that he had the beginning for a sequel planned out, and that after a pitch to the studio through Emmerich and Safran, they were receptive and enthusiastic about his ideas.[1]

On August 22, 2020, during the "Aquaman 2" panel for DC FanDome, James Wan revealed that the tone for the film would be more serious compared to its predecessor. Aquaman star Patrick Wilson expressed excitement for the potential world building in the sequel, which Wan went on to confirm would definitely be something the audience would get to see.[12] Later, Wan went on to promise that he'd have 'splashy stuff to share' in 2022, since at the time he was in the early secretive stages of planning/designing for the film.[13]

On June 10, 2021, director James Wan posted a picture on Instagram revealing the film's title to be Aquaman and the Lost Kingdom.[14]

On March 12, 2021, it was reported that production on the film would begin in June in the United Kingdom, under the working title "Necrus".[15] In May 2021, Jason Momoa confirmed in an appearance on The Drew Barrymore Show that the film would being shooting in July.[16]

On June 28, 2021, James Wan announced on Instagram that they had officially begun filming.[17]

Logo shown in a Shazam! trailer for April Fools Day 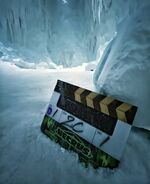