Aquaman's armor is the regalia of Atlantean royalty used by the crown prince of Atlantis, Arthur Curry, better known as the hero Aquaman.

During his pursuit of the Mother Boxes, the New God warlord Steppenwolf invaded the underwater kingdom of Atlantis to retrieve the Box acquired by the Atlanteans after his failed invasion of Earth thousands of years ago.

As part of his efforts, Steppenwolf began kidnapping Atlantean guards who gave off the scent of the Mother Box. Nuidis Vulko, Arthur Curry's mentor approached Arthur and informed him of the kidnappings, attempting to convince him that the time was right for him to take up his responsibility to the throne. Arthur's armor was thrown at Arthur's feet, yet Arthur made no move to reclaim it, frustrating Vulko even further.

In his pursuit, he successfully defeated the Atlantean forces protecting the Mother Box, and subdued Arthur when he attempted to interfere. Upon successfully retrieving the Box, Steppenwolf retreated from Atlantis, much to Mera's dismay.

Mera then spoke with Arthur, who'd grown estranged from the Atlantean half of his dual heritage, revealing to him that he hadn't been abandoned by his mother like he'd believed and that her love for him should be what inspires him to protect his people. Pressing further, Mera stated that retrieving the Mother Box is what his mother would have done.

Convinced, Arthur retrieved the Atlantean armor, donning it to face Steppenwolf as the Aquaman.[1]

Arthur later used some variations of the armor when he returned to Atlantis, such as Atlantean Armor, Gladiator Armor and Atlan's armor.[2]

The armor is shown to be resistant to the damage of Parademon Plasma Carbines, and was unaffected by the powerful Electro Axe of Steppenwolf. It is shown that it also resists various weapons of the Atlanteans. 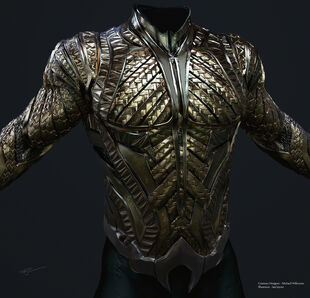 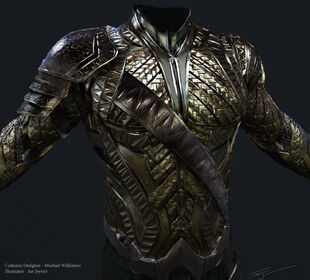 Featuring the shoulder strap seen in his promotional image. 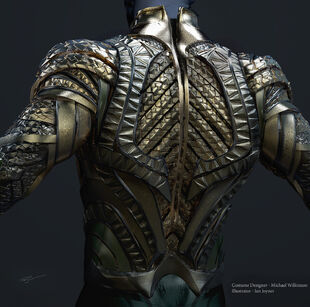 Retrieved from "https://dcextendeduniverse.fandom.com/wiki/Aquaman%27s_armor?oldid=192610"
Community content is available under CC-BY-SA unless otherwise noted.