"I pray a day will never come when she has to fight. But you know, a scorpion must sting, a wolf must hunt..."
―Antiope to Hippolyta[src]

Antiope was the former general of the Amazons, sister of Queen Hippolyta, as well as the aunt of Princess Diana. She was extolled by Hippolyta as the greatest warrior in the history of the Amazons. Antiope personally mentored her beloved niece Diana in combat training for centuries leading up her death. She perished during the German invasion of Themyscira, sacrificing herself to save Diana's life during the attack.

Shortly after Zeus presumably created humanity, his malevolent son, Ares, attempted to corrupt them, fueling humanity with rage, hate, and bloodlust. As a result, Zeus created the Amazons as a way to help guide humanity and spread love.[1]

Before Diana was born, Antiope and her fellow Amazons allied themselves with the Olympian Gods, Mankind, the Atlanteans and the Green Lantern Corps to fight Steppenwolf, who had come to conquer and remake the Earth into a planet similar to Apokolips, under the command of Darkseid. The war was eventually won by the alliance and Steppenwolf's army retreated, leaving the three Mother Boxes behind. The boxes were left under the control of Mankind, the Amazons and the Atlanteans.[2]

Escaping slavery and moving to Themyscira

After the attempted invasion, Ares induced war among humanity again, which lead to them warring with and enslaving the Amazons, unbeknownst to the other Olympians. Antiope and her sister Hippolyta, however, fought back against their captor(s) and succeeded in freeing their people. Ares would soon turn on the other Gods themselves for aiding the Amazons.

Ares thus rebelled against his father as well as the other Olympian Gods for not sharing his bloodlust and anti-human sentiment, starting the devastating War of the Gods against all of them. Ares killed his divine family off one by one until only Zeus himself remained. Zeus then went on to face Ares in combat and was able to defeat and banish Ares from Olympus. In order to account for the possibility of losing his life in the war, Zeus conceived a demigod child with Antiope's sister, a child capable of one day defeating and killing Ares (therefore known as the "Godkiller"), a daughter named Diana.

Zeus, weakened, used the last of his divine powers to create the paradise island of Themyscira as a haven for the newly freed Amazons, using divine magic to conceal it from the rest of the world to ensure that the Godkiller Diana would grow up safely from Ares' reach.[1]

Millennia after the War of the Gods, Antiope served under Queen Hippolyta and oversaw the military force of the Amazons as their General, alongside Lieutenant Menalippe in preparation for the eventual return of Ares. She urged Hippolyta to let Diana train her as an Amazon warrior and discover her true power. Despite her sister's disapproval, she trained Diana in secret from girlhood to her youth and constantly urged her to stop holding back. Eventually, Hippolyta discovered their training and expressed her worries about Diana's fate. Despite her frustration, Hippolyta told Antiope to train Diana harder than any Amazon before her. Antiope continued to train Diana into her adulthood, mastering her warrior skills. Despite her proficiency, Antiope still managed to overpower her during a duel and chastised Diana for letting her guard down. As Antiope fought her vigorously, Diana clashed her Bracelets of Submission and created a massive shock-wave, knocking Antiope back.[1]

Later, as German forces invaded Themyscira in pursuit of the American spy, Steve Trevor, Antiope led the Amazons on horseback against the German attackers. She defeated several German soldiers, coordinating with her fellow Amazons. However, during the end of the fight, Antiope saw a German soldier firing at Diana and jumped in front of the bullet to protect her. Antiope's killer would promptly be shot down by Steve. Lying on the beach, Antiope urged Diana to leave the island and defeat Ares, before passing away.[citation needed]

Antiope is an extremely capable and skilled leader, as well as an equally courageous warrior, evident in how she saved her fellow Amazons from human slavery as the War of the Gods broke out, in how she fought alongside with her Amazons sisters during the invasion of Themyscira, and in how she sacrificed her life to save Diana. Antiope is also quite a bit more reasonable than her sister Hippolyta, since she fully supported her niece Diana's ambition to become a great warrior, training her more intensely than any of her other protegees. Antiope also seemed displeased with Hippolyta deceiving Diana about the latter's demigod heritage and "Godkiller" destiny, since as she lay dying, Antiope unsuccessfully attempted to tell Diana the truth. Also, Antiope bore no grudge against her beloved niece for accidentally injuring her with the Bracelets of Submission shock-wave, as she didn't hesitate to jump in front of a bullet shot at Diana, saving her niece's life. Antiope did not die in vain, however, as her sacrifice inspired Diana to finally leave the island and save "Man's World" from Ares.

Amazonian physiology: Like all Amazons, Antiope possesses superhuman abilities, such as strength, durability, agility, stamina, and longevity. However, as the greatest Amazon warrior, her physical prowess surpasses all others to the point of being a match even for a non-awakened demigoddess.

"Isn't that why I have the greatest warrior in our history leading an entire army."
―Hippolyta to Antiope[src] 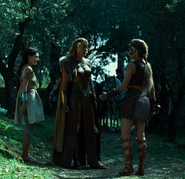 General Antiope killing a Parademon
Add a photo to this gallery

Retrieved from "https://dcextendeduniverse.fandom.com/wiki/Antiope?oldid=158725"
Community content is available under CC-BY-SA unless otherwise noted.