"I certainly hope the next generation of Waynes won't come to inherit an empty wine cellar. Not that there's likely to be a next generation..."
―Alfred Pennyworth[src]

Alfred Crane[1] Pennyworth is the butler, mentor, surrogate father, and close friend of Bruce Wayne. Alfred has served the Wayne family since before Bruce was born. After Bruce was left orphaned from the murder of both of his parents when he was a boy, Alfred watched over him as a parental figure, watching him grow and mature, and assisting him in his quest to become the Batman.

He assisted Batman again when the Justice League tried to stop Steppenwolf's attempt to terraform Earth, an attempt which yielded success.

Alfred was born in the United Kingdom, in the middle of the 20th century. As a young man, he would join his country's armed forces, and shortly thereafter, the SAS Special Forces, where Alfred would receive training in intelligence gathering, field medicine, weaponry, as well as the ability to pilot all sorts of vehicles and aircraft.[2]

Employed by the Waynes

At some point, Alfred retired from the British Armed Force and moved to the United States of America, where he became the butler and bodyguard to Thomas Wayne and his wife Martha, billionaire philanthropists from Gotham City. Sometime later, they had their only child, Bruce, whom Alfred would come to mentor.[3]

In 1981, the Waynes were murdered by a mugger, whilst taking a young Bruce to see a showing of "The Mark of Zorro" at the Aragon Theater, and Alfred was placed as the legal guardian to Bruce. The young boy's anger at the death of his parents and the blame he placed on himself was apparent to see, and he proclaimed that he would rid Gotham City of the criminal and the corrupt, and asked Alfred for his help.[3]

Bruce would stay true to his word, eventually becoming the vigilante "Batman" as an adult, with Alfred's SAS training allowing him to help Bruce build his numerous high-tech gadgets, to operate the Batcomputer, and to give Bruce pertinent advice during the latter's missions in his one-man anti-crime crusade.[4][5]

18 months after the Black Zero Event, and 20 years after becoming Batman, Alfred and Bruce continued their mission to combat organized crime in Gotham City as well as preparing countermeasures against the perceived threat of Superman. Alfred operated on the Armored Batsuit while he and Bruce discussed Anatoli Knyazev and his connection to the White Portuguese, though Alfred himself speculated that this person might not even actually exist, instead being a mere "phantasm".[3]

"The Bat interrogated six people and came away with nothing. It was Bruce Wayne that got the information."
"Well, Bruce Wayne can't break into Lex Luthor's house."
"Bruce Wayne won't have to. He's been invited."
―Bruce and Alfred[src]

When Bruce Wayne was invited to a social gathering by Lex Luthor, Alfred guided him via earpiece through Lex's mansion and plants a data drive in Lex's computer servers to extract information regarding the White Portuguese. However, Diana Prince steals the drive and leaves before Bruce or Alfred could decrypt it.[3]

"But he is not our enemy!"
"Not today. 20 years in Gotham, Alfred - we've seen what promises are worth! How many good guys are left?! How many stayed that way?!"
―Alfred and Bruce[src]

Later, after Diana returns the drive to Bruce, he decrypts the drive and tells Alfred that the White Portuguese is actually the name of a ship carrying a large nugget of Kryptonite from the wreckage of the World Engine to Lex Luthor, which is capable of significantly weakening Superman. Alfred vehemently protests Bruce's decision to combat Superman, believing that he is not an enemy of humanity. He pleads to Bruce to change his mind, saying that it would be suicide to try to kill the Man of Steel, though Bruce remains stubborn.[3]

When the Capital bombing occurrs, Alfred sees it on the news in the Glasshouse and also sees the checks that Wallace Keefe sent back with hate messages. Alfred realizes that Bruce has snapped, and can only look on as the latter prepares for his battle.[3]

With his physical preparation complete, Bruce retreats to mentally prepare for his duel with Superman at the abandoned Wayne Manor, where he is found by Alfred, who once more attempts to implore Bruce to stop, claiming that Batman cannot win such a confrontation, with it being "suicide".[3]

Bruce grimly responds saying that he is now older than his father Thomas Wayne had ever been, and that this might be the only thing that he does which actually matters, since despite Batman having defeated numerous Gotham City criminals and supervillains over the last 20 years, "criminals are like weeds", in that if 1 is pulled up, another grows in its place. While Superman has the potential to become the most formidable supervillain in history, taking him down before that happens is "about the future of the world", something Bruce sees as "Batman's legacy".[3]

Bruce then grimly muses at how his father had once told him that despite the Wayne Manor itself being built on railways, real estates and oil, the first generation of Waynes had made their fortune as hunters, trading pelts and skins with the French. Thus, Bruce not only hopes to live up to his father by taking Superman down, but also feels kinship with his ancestors, as a hunter of sorts. As Bruce walks away, Alfred, understanding that trying to stop the former is hopeless, bitterly remarks "So falls the House of Wayne."[3]

After the fight between Batman and Superman is resolved, Alfred tracks down Knyazev's cellphone to a portside warehouse in Gotham where Martha Kent is being held. Batman flies the Batwing towards the safehouse, and Alfred scans the warehouse to find 24 mercenaries on the third floor guarding Martha. He then takes remote control of the Batwing and lands Batman on the second floor, who then proceeds to neutralize all the men, seemingly kill Knyazev, and rescue Martha.[3]

"Alfred, are you seeing this?"
"I am. It maches the other sightings. And that pattern is all over Luthor's notes."
―Batman and Alfred Pennyworth[src]

After Bruce Wayne defeated a burglar and a parademon, the parademon exploded and Alfred watched in surprise. He and Bruce then uncovered a pattern signifying the mother boxes. Bruce then told Alfred to prepare a jet for Iceland realizing it was time to assemble the team.[6]

After Arthur Curry/Aquaman refused Bruce's offer, he and Alfred got back on the jet and headed back to Gotham City. While on the jet, they began to go over the other members for the team like Barry Allen, Diana, and Victor Stone discussing their character backgrounds and powers, while Alfred also makes a joke about Bruce's interest in Diana's skillset much to his disdain. Alfred also proclaims that he misses the old days where he and Bruce would take down normal criminals like Oswald Cobblepot, and being able to recognize the world and Bruce remarks by saying, "I don't have to recognize it, I just have to save it."

While Wayne was working on the Flying Fox, he and Pennyworth were testing different types of sounds to see which one alerted the parademon from the rooftop. Wayne then heard an alarming sound and recognized it as the sound that affected the parademon, so Pennyworth decided to rig the suit with that alarm so that they would be ready in case of another parademon attack.

When Diana was reviewing footage of Victor Stone, Alfred told her that footage always gets a little twitchy which then led to Victor speaking on the Batcomputer. Diana then convinced Victor to meet with her, while Alfred jokingly remarks, "Looks like you have a date tonight."[6]

"Where are we, Alfred?"
"Braxton Island. You should be... directly under the venting tower for the tunnel."
―Batman and Alfred Pennyworth[src]

When the Justice League had reached Braxton Island, Alfred then gave them directions into the machine room where the hostages were being held. He then assists Batman by taking control of the Knightcrawler and bringing it to him in order for Batman to fight Steppenwolf and the parademons. Cyborg then responds to him and takes over the Knightcrawler with Alfred left confused wondering who he was.[6]

"You've got a team here."
"Superman could bring this team together better than I ever could. His strength--"
"It doesn't matter how strong you are. Or what abilities you might have..."
"He was more human than I am. He lived in this world. Fell in love. Had a job. Despite all that power. The world needs Superman. And the team needs Clark."
"And what does Clark need? Maybe he's at peace."
"He'll get over it."
―Alfred Pennyworth and Bruce Wayne[src]

Just as Bruce was working on integrating and boosting the alarm sound that alerted the parademons, Alfred comes in, bringing a cucumber drink. They begin to discuss whether or not to bring Superman back to life or why Bruce thinks the team might not be enough.

After Superman was resurrected and about to kill Batman, Pennyworth arrived with Lois Lane, by bringing her as the "big gun", to Heroes Park in order to calm Superman's rage.[6]

"Whatever you're in the middle of, it's spreading for miles. Satellites show civilians moving east. They're not gonna make it."
―Alfred Pennyworth to Batman[src]

Discovering that Steppenwolf planned on combining the Mother Boxes near a village located in Russia, the Justice League had gone to stop him by taking the Flying Fox. As the five heroes approached inside the airplane and it flew off, Alfred watched that.

While Batman drove the Batmobile to alert the Parademons with the same alarm, Alfred, still in the Batcave, tuned it right up.

Alfred then informs Batman that people are in danger, which he tells Flash that he needs to save the civilians.[6]

After stopping the invasion of Parademons led by Steppenwolf, Wayne and Pennyworth started planning to rebuild the Manor as the headquarters for the Justice League and its potential future recruits, with the help from Diana Prince.[6]

"Go upstairs and socialize, some young lady from Metropolis will make you honest... In your dreams, Alfred."
―Alfred Pennyworth[src]

A traditional English gentleman, Alfred always keeps a stiff upper lip, even under the extraordinary circumstances imposed by his master's secret identity. No matter what the situation, Alfred always responds with resolve, equanimity, and good (albeit somewhat sarcastic and dry) humor.

Though he and Bruce do occasionally quarrel (notably when Alfred insisted that Superman is not their enemy), Alfred's loyalty remains absolute. Partially this could be explained by his continued loyalty to Thomas Wayne, and a traditional sense of duty to one's master. At the same time, Alfred finds ways to express his pride in Bruce, and his belief in the cause he is fighting for as the fearsome vigilante "Batman".

Alfred is remarkably wise, observant and perceptive, as he is able to understand that it is Bruce's "feelings of powerlessness" that changed the latter quite a bit, he is able to see that Superman is not humanity's enemy and adamantly tries to convince Bruce of that, and he is one of the extreme few (along with supergenius Lex Luthor) to see through Bruce's exceptionally skilled deceptions, as Alfred wasn't fooled when Bruce initially attempts to lie to him about the Kryptonite importation.

As the long-term butler and head of security of Batman, Alfred has access to Wayne Enterprises technology, some of the most sophisticated technology in the world (most of it located in the hidden Batcave under Wayne Manor), with Alfred personally helping Bruce create the equipment that is crucial to him as Batman. 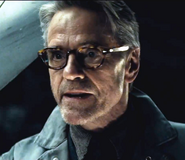 Retrieved from "https://dcextendeduniverse.fandom.com/wiki/Alfred_Pennyworth?oldid=115039"
Community content is available under CC-BY-SA unless otherwise noted.