View source
watch 01:36
We're Getting Mutants in the MCU - The Loop
Do you like this video?
Play Sound

Florence Kasumba
Senator Acantha is an Amazonian politician in Themyscira.

Acantha was created as an Amazon warrior by Zeus just like her other sisters. She served her Queen Hippolyta for thousands of years.[1]

Acantha participated in the battle against the German Army who invaded Themyscira. She was also present during the interrogation of Steve Trevor.[1] 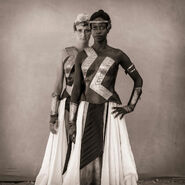 Behind the scenes photography by Clay Enos